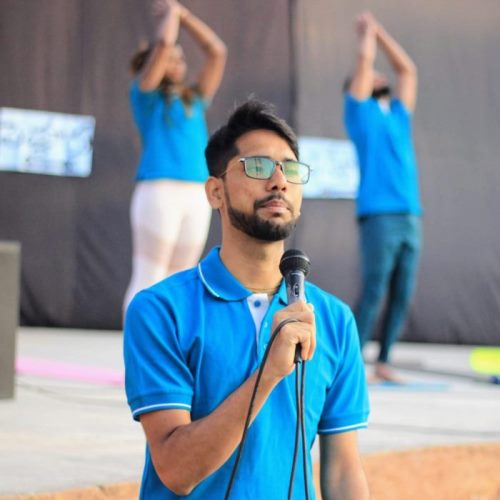 Krishna Kumar, founder and director of Krishnayogashala is a yoga practitioner, instructor, facilitator, and Teacher-Trainer.
He has 12+ years of experience in teaching, training, mentoring, and coaching students in diverse fields of yogic sciences and arts. Teaching is an integral part of his persona. He combines his enthusiasm and facilitation skills with his lifelong passion for yoga to today teach, mentor, and empower both yoga practitioners as well as yoga teachers.

A yoga student and practitioner from his childhood days, Krishna always had an appreciation for this ancient form and uses various traditional and modern approaches of yoga including Vinyasa & Hatha styles of yoga, along with Yin and Restorative yoga, Pranayama and Meditation techniques that not only help enhance strength, endurance, flexibility but he also gives individual attention to correct alignment and posture; his students see improvements in their physical ailments such as sciatica and back pain.

With his knowledge about the human anatomy, asana alignment, yoga philosophy and
Sanskrit texts, Krishna has trained over 5000 yoga practitioners & 100 teachers of all ages across the globe. In the 9+ years of teaching and facilitating yoga as an ERYT 500 (Experienced Registered Yoga Teacher 500), he has served various roles including being a personal yoga instructor, group facilitator, and a yoga studio manager. As a yoga centre manager he was completely responsible for end to end operations, administration procedures, infrastructure and logistics, as well as yoga facilitation at the centre.

His corporate clientele includes Hitachi, Tata Consultancy Services, D. E. Shaw, Dr. Reddys, Google, BSNL, Bank of America, Infosys, Cavium Networks, Kotak Mahindra, amongst many others. He has taught yoga for over 6 months at the “Happy Streets” public events organised by Times of India group and is an ongoing yoga facilitator for various Decathlon events.
He has organized and conducted ‘108 Suryanamaskaras’ and such similar events.

As director of yoga teacher training [email protected], he trained more than 100 yoga teachers from students across the globe. The teachers trained by him with as branch heads, lead teachers and yoga teachers at different yoga centres.
Krishna teaches yoga on a television show,Yoga class on ETV life which has been running over+500 episodes.